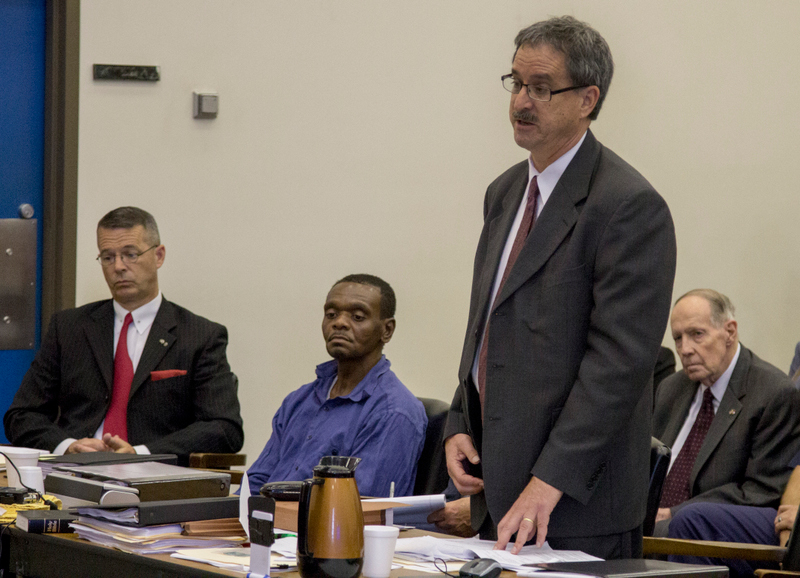 At the beginning of 2017, Ken Rose retired from his longtime post as an attorney with the Center for Death Penalty Litigation in Durham.  Below is our tribute to the unforgettable 35-year career of one of North Carolina’s most passionate and committed death penalty abolition advocates.

Ken Rose’s client, Henry McCollum, was about to be released from death row. The story was spreading around the world: An innocent man, sentenced to death as a teenager, finally freed after 30 years by definitive DNA evidence. The moment was a defense attorney’s dream come true.

But Ken wasn’t celebrating. Instead, his mind was racing. Night and day, he pored over the case files, catalogued every injustice Henry had endured in three decades of awaiting his execution, every lie that was told in order to convict him, every person who allowed it to happen. He didn’t exempt himself. He had represented Henry for 20 years and, until now, had not been able to prove Henry’s innocence.

Even after more than 30 years of defending death row inmates, seeing the injustices of the death penalty in the starkest possible light, Ken was struck anew by the cruelty and indifference of our system. “There was so little evidence, and they were going to kill him,” Ken told the News & Observer afterward, when he was profiled as a Tar Heel of the Week. “It took almost a miracle to stop it.”

Ken retired this month from the Center for Death Penalty Litigation, where he worked since 1996. He had come to North Carolina in 1989, a young lawyer who began his career in Mississippi with the idealistic notion that a poor criminal defendant facing the death penalty should get the same quality of defense as a deep-pocketed corporate client. He grew into one of North Carolina’s most respected and visionary death penalty attorneys.

Ken pushed for the passage the N.C. Racial Justice Act, a groundbreaking 2009 law that brought to light decades of systematic racial bias in capital cases. He is also a key player in North Carolina’s lethal injection litigation, which has kept executions on hold here for more than a decade – an achievement that no other southern state has even approached.

Through it all, Ken never lost the idealism or the passion that has driven him since his earliest days. He never stopped being surprised – and outraged – at injustice. He never stopped plotting how to outwit the machinery of death, constantly dreaming up creative strategies that pushed boundaries and set precedents. And he never stopped representing every client as if both of their lives depended on it.

“Ken is both fearless and relentless on behalf of his clients,” says CDPL’s Executive Director Gretchen M. Engel. “There were times when he made judges and opposing counsel furious with his arguments. You could cut the tension in the courtroom with a knife. Most lawyers would have lost their nerve and started backpedaling.  Ken was eerily calm and he never backed down.”

Ken said that the biggest lesson of his 35 years defending some of the most despised people on the planet was: There is no such thing as a “monster.” Instead, he found that his clients were people damaged by poverty, racism, mental illness, intellectual disabilities, or abuse. People at the mercy of a system that punished arbitrarily, and of a society that failed to see the humanity of its most disadvantaged citizens. He said he found his clients to be no more or less human than himself — capable of terrible mistakes, but also of love, kindness, and generosity.

Even as he was crafting complex legal strategies, Ken always took the time to honor his clients’ humanity. As a young mitigation investigator, CDPL’s Gerda Stein remembers working with Ken on the case of David Huffstetler, a condemned man who stood very little chance of having his death sentence overturned, who was also gravely ill and not expected to live much longer. They were granted a hearing, and Ken asked the judge’s permission for David to speak.

“David spoke at length, much of which was completely irrelevant,” Gerda remembers. “I started to get nervous, but Ken sat calmly and after David finished, treated him with deep respect and kindness, thanking him for speaking. I was incredibly moved at how he gave David that last chance to be heard, to have a voice.”

Ken started his career with CDPL as its executive director. But 10 years later, in 2006, he decided that administrative duties were taking him away from the work of saving lives. He stepped down and became a staff attorney.

He was without ego, requiring neither a fancy office nor fancy clothes. He was generous with his time, happily giving it to any attorney, staff member, intern, or random person off the street who was interested in helping end the death penalty. Every staff member at CDPL knows the feeling of Ken barging into their office, almost vibrating with excitement to discuss his latest idea. Yet, when his ideas came to fruition, he frequently gave the credit to others.

“He sometimes introduced me to others by giving me total credit for things he was the driving force behind, or projects where we worked together closely,” says CDPL staff attorney David Weiss. “He’d say, ‘This is the guy in charge of the lethal injection litigation stopping executions in North Carolina.’ I never saw Ken try to claim the limelight for anything, even though he always deserved it.”

Ken’s commitment was total, and he expected the same from others. Ken believed that constant vigilance was crucial to longterm success. He never allowed people to rest on their victories, because he worried that while they celebrated, the next defeat could sneak up on them.

This was true even on the night the legislature passed the Racial Justice Act, a surprise victory achieved only minutes before the Senate’s adjournment. CDPL’s Board President, Jay Ferguson, had worked with Ken to lobby for the law. They stayed up late that night, watching in astonishment as a last-minute victory was snatched from the jaws of defeat.

“Of course, we were all ecstatic,” Jay remembers. “We were all wearing these blue and white buttons that said ‘Support the Racial Justice Act.’ As we were walking out, I took off my button and made a grand gesture of throwing it in the trash because we didn’t need it anymore. Ken, without any hesitation, dug in the trash, took it out and said, ‘This isn’t over. We may need these again.’ It’s that level of thinking — many moves ahead — that makes him such a great advocate.”

Even in his last weeks in the office, Ken stayed in character. He continued pitching ideas for ambitious new impact litigation projects. He continued poring over every report and national news story on the death penalty. And he spent days preparing a clemency petition for a death row inmate who wasn’t even his client. Ken went to visit the man at Central Prison and was moved to tears by his efforts to redeem his life, even within the confines of death row.

As 2017 begins, Ken is no longer in his office at CDPL. But he is far from gone. He is still representing some of his clients and working on lethal injection and RJA litigation. And we have no doubt he’ll still be reading the news, poring over statistical reports on the death penalty, and plotting. We expect he’ll be calling us any minute with his next idea.